Sometimes we can take on a sense of weariness, of being jaded. Of tiredness. Sometimes it goes a bit deeper. World weary, downtrodden and bereft of that lust for life. Usually it is fleeting or at least transient.  Sometimes it takes a greater grip.  We have a great Scottish expression for that feeling – we say we are scunnered.

I have been scunnered this week.  Physical tiredness plays a part but only a small part. The rest is a great deal more profound.

Back in November last year my grandson, David had his head shaved to raise awareness and funds  for Gammadelta T-cell lymphoma, a rare and aggressive form of blood cancer. It was an enormously generous act and it was prompted to show support to a pupil at his school who had just been diagnosed.  Yes, a pupil at his school. Jak Trueman, a boy aged 15 years old. It was cruel enough that my grandchildren were confronted with cancer in their grandparent, but to be plunged into the harsh reality of cancer in a peer at such a tender age is truly cruel.

David – before and after his headshave

Jak’s story or journey has been well documented and shared since his diagnosis, thanks especially to a wide support network and of course social media. 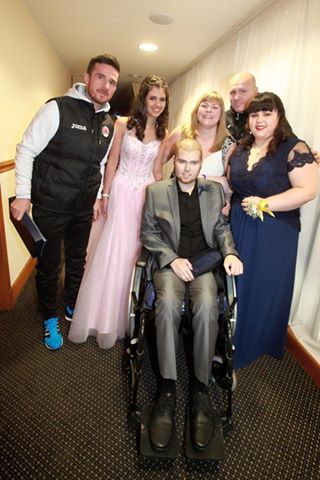 Following chemotherapy, Jak was preparing for a stem cell transplant late in January when the preparatory bloodwork threw up some concerning results.  Subsequent scans showed that the disease had progressed into his organs and bones and it was clear that his time was limited when his family shared the devastating news on 24 January.

In the following days, there was a flurry of activity, realising many of Jak’s wishes and dreams but also using the gathering attention to raise awareness and funds.  I will not go into detail as that is well documented online in numerous places, including his Facebook page.

I woke in Yangon on Tuesday morning to a Facebook feed filled with news updates relating to Jak.  I didn’t need to open those links to know that this could only mean one thing, Jak had died only days after learning of the spread of the disease.

He leaves an incredible legacy for one so young, yet enormously mature and generous.  He  leaves a family, school and community, united in grief and coming to terms with the privilege and grief of knowing such an incredible young man.  At the same time, galvanised and inspired to fulfil a series of plans which he had been shaping in his final days. The fundraising towards research into Gammadelta T-cell lymphoma has had a major boost as has awareness into childhood and blood cancers.  He leaves a phenomenal legacy in his name and memory.  Jak, his family and supporters (Team Jak) developed the concept of “Jak’s Den” which will be a space incorporating a number of features:

This is personal.  Both of my grandchildren were in the school band with him, and in particular my grandson, David really looked up to him.  David was proud to shave his head and show support.  We know how important image is to young people and a head shave at that age is a big deal.

The morning after Jak’s death, pupils at school wore gold ties or hairbands to remember Jak. My daughter had a crack of dawn run to the shops to find a gold tie for David. An extraordinary movement has been kindled from the grief and loss of one of their friends.

Only one day later, we were reminded that World Cancer Day was again upon us. And that is when I realised just how scunnered I was with cancer.

As the sun sets, so too does it rise.  I am fortunate in that whilst I have that all pervading feeling of being scunnered, I am confident that it will pass and that the new day will help to lift the spirits. I am even more fortunate that through my grandchildren I have a connection, albeit tenuous, with an extraordinary young person who shone a light into a very dark space and leaves pride and inspiration alongside grief.