When I was very young our family lived in a little house which was called “Sanctuary”. We were there for only around two or three years. I had no idea what sanctuary meant but it was a familiar word with associations of comfort, safety and the warmth which a child associates with home.  Even today, decades later “sanctuary” is a word which wraps me in a feeling of comfort and transports me to my early childhood.

As well as being a place of safety, refuge or a haven Sanctuary is also a term for a reserve or area for wildlife and is often protected.  In Borneo, there are sanctuaries where endangered species have a safe space, often to recover from capture or ill treatment or if they have been orphaned.  The Sanctuary provides a safe space, in their natural habitat but under the watch of naturalists to ensure their safety.

Most well known is the orang utan and the facilities and spaces for their protection from a variety of dangers and risks.  Funnily the name orang utan is another term which instantly takes me back decades, to my earlier school years.  As an only child in a remote Scottish area, I spent a great deal of time outdoors, but weather would often curtail outdoor time.  The other thing I which took up much of my time was reading, and I would spend hours reading all manner of reading material – books, stories, poems and what I would probably call “discovery” books.  These were any books which could absorb me completely.  They could be encyclopaedias (yes, I could spend hours being led on a journey in an encyclopaedia), books about space and the planets, natural history books, books about other far away countries, or long ago people.

Reading is, of course, a solitary experience although I was far from lonely or bored. (Of course my parents may have had a very different recollection!) The thing about solitariness however, is that there is not a cross reference for many things and I would often find that the pronunciation of a number of words which my mind devised from the written word, sounded very different when I heard them pronounced.  It could be quite unsettling finding out that I had not emphasised the right syllable or had lengthened an ‘a’ or ‘i’ incorrectly.  I am not sure how old I was when I discovered that my inner pronunciation of orang utan was completely wrong. What others called “arangatangs” was to my astonishment that very animal which I called an “orange oootang” (with emphasis on the first syllable of utan). Try saying it aloud, it is really rather different!  My childish mind had associated the colour of the primate with its similarly sounding name. it all made sense to me! In fact,  the word “orang” is Malay for “person” whilst “utan” is derived from “hutan” meaning forest. Thus, orang utan literally translates as “person of the forest”. And absolutely nothing to do with its auburn colouring!

Sarawak is very proud of its wildlife and especially of the orang utan. One of the most popular trips for a visitor is to see the orang utan and generally we crave seeing the animal is as natural a surrounding as possible. Although my research was not extensive I knew that I did not want to see a caged animal and that the setting I would be most comfortable with, would be a Wildlife Sanctuary, such as the Semenggoh Wildlife Centre and Nature Reserve.  However, I also learned that luck is a major factor if you go to the sanctuary where the animals live in the semi wild. There is no guarantee that they will come down to the feeding platforms where bananas and other seasonal goodies are left out for them.  This is especially the case in fruiting season when they do not have to forage so much with an abundance of fresh “still on the branch” food. When I made arrangements to visit the Sanctuary, it was made clear to me that a combination of rain and abundant food made sightings very rare at this time of year.

However, I rose very early, and swallowed a few mouthfuls of rushed omelette before  waiting for the transport to arrive.  I was all set with a small backpack, no visible food or water, and plenty of mosquito discourageant. And of course my camera and a heap of naive optimism.

The morning was unusually clear, the clouds had parted although there were still wisps threaded across the peaks.

The drive was pleasant, and my mood one of enthusiasm with a tinge of that guarded optimism. No matter whether I saw an orang utan or not, I was heading on an adventure and somewhere new.

Driving towards the Sanctuary, across the Santubong bridge

As we walked through the forest towards the first feeding platform, the guide touched my elbow and pointed through the trees.  There, hanging like an acrobat was a hulky orang utan tucking into a banana feast.  I was spell bound. 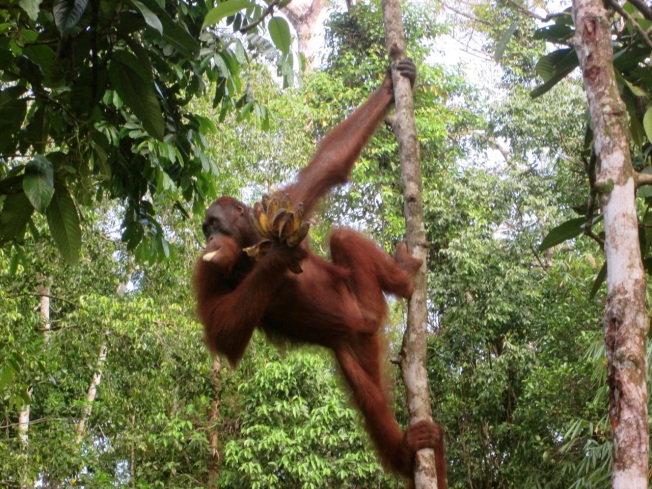 These bananas are MINE!

We were given a very detailed and clear briefing.  There are strict rules in the sanctuary, and for good reason:

We then spotted a mother and her young.  Apparently there is not a specific term for the young, so they are called babies or infants. This mum and wee one were hanging around in the trees, seemingly listening to our briefing!

mum and infant in the trees 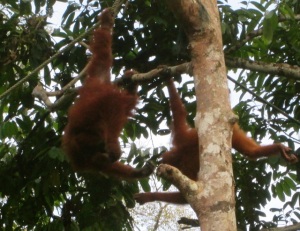 They soon joined by the large male as he swung over to help himself to some more fruit.

The male on his way through the jungle canopy

I have no idea why, but we were extremely fortunate. For whatever reason, that morning a number of orang utans had decided to hang around near the feeding platforms, and the nearby jungle where we could see them.

I watched from a distance, as they carried on with their own day. Watching them quietly, listening to the sounds of the rainforest and soaking in a very special atmosphere. 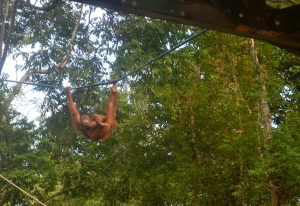 Returning afterwards, people were surprised that we had such a fortunate morning. I had been advised that I should not be disappointed if I saw no orang utans, I  have no idea why of all mornings, that morning they were out and about.  And really, the why does not matter. It just was what it was, and I am really very thankful.

Sunlight on fur, watching through the trees

The memories are still so vivid. If I close my eyes I can hear the rainforest sounds, and see the orang utans peering through the jungle canopy, the sun lighting up their bright fur. A true sanctuary in many senses.