This is a beautiful time of year – the start of the dry season, relatively cooler and drier air and disappearance of the thick clouds. Mostly. This year the rains have been teasing us with frequent reappearances, and some very heavy rainstorms. Every time we think we have seen the last of the rains, we are surprised by another downpour. Now we have had a few days with blue skies and slightly cooling mornings and evenings for a little longer. We quietly whisper to ourselves that the rains have now finally departed. The mornings are cool and dry. Perfect for early morning walking.

I have frequently said that I am not a natural “morning person” in that I always want to turn over and have a while longer in the comfort of my bed. But I know that once, I am up and especially once I am out of the door, then I have a sense of something akin to pride and appreciation that I have made the effort.

This is also a special time of year in that it is in between the full moon festivals of Thadingyut and Tazaungmon in Myanmar, which I wrote about last year here:

Throughout the wettest days of the monsoon, between the July and the October full moons of Waso and Thadingyut , there is a period which is often called  “Buddhist Lent” in Myanmar. During this period, it is usual not to begin new ventures – not to start a new job or move house and not to get married. At the Thadingyut Full Moon (usually in October) there is a great sense of festivity and the city is bathed in lights and candles. The temples are packed and shops full of gift packs of monk robes and appropriate gifts.  The night sky is punctuated with lanterns floating upwards.

During the daytime, the streets are nowadays a-buzz with post election smiles and purple-inked fingers, with the trucks with money frames and thumping music, daily bustle and most folks holding umbrellas to shield them from the sun.

However, the early mornings are completely different in nature. The streets and lanes are misty, there are few cars but more than a few people with early morning purposes. Before the sun rises too high in the sky, the air is cool and the light is mellow. It is a very special time. I have been able to re-establish an early morning routine which replaces swimming for now, with a morning walk. 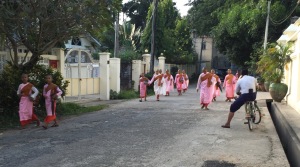 During my walk the other morning, I passed a group of young nuns, collecting alms as usual on certain days of the lunar month. In their pink robes, lit gently by the soft sunlight and with shy smiles we each walked on towards the coming day.

I hardly noticed the man on the bike, until I was alongside him. I did smile to myself when I spotted his wallet sticking out of the back of his lyongyi, reminding me of how many things have not changed here. It is not so easy to hold on to your wallet if it is on display in most other places.

So what did surprise me, was  seeing the reason that he had paused on his bike. He had a smartphone pressed to his ear and was in deep conversation. And that is something which is very different. When I arrived in Myanmar in 2009, mobile phones were few and far between, incredibly expensive ($1500 when I arrived) and not easy to obtain. I had no mobile phone for my first 3 years in country. We used to write phone numbers in little notebooks and use landlines. Now almost everyone (in urban areas at least) has a smartphone.

So this image captures much of what I love here. My morning walk would have been very similar 6 years ago. However, while we are indeed surrounded by change, there is much which beautifully preserved.

Sometimes the richest of experiences are simple,  free and quite literally on our doorstep.