Christmas has been an oddly emotional and strange time for me since I was diagnosed. When I first found the lump in September 2009, the first thing which came to my mind was that I would not be alive to see the coming Christmas.  When Christmas 2009 came, not long after in weeks, but after a new lifetime of surgery, treatments, needles, appointments, a whole new vocabulary and learning to live with the cancer mindset, I was incredibly emotional.  I struggled to hold tears in check when carol singers were singing a version of Jingle Bells in Myanmar outside our gate.  I crumbled again last year, when the carollers came into our house and my composure was just to difficult to maintain.

So this year, I felt the first wobbles as we approached Christmas and I saw the carollers outside neighbouring gates.  However, I left Yangon on the 23 December for my Mrauk U adventure and immediately was caught up in the immediate, making plans and exploring.

I arrived in Mrauk U on Christmas Eve and spent the rest of the day exploring on foot and taking a ridiculous amount of photographs.  On Christmas Day I hired a bicyce and expored the nearly villages and temples, getting lost a number of times and having a wonderful time.  I seemed to provide a great source of entertainment, asking for directions and questions, stopping for a cold drink in a roadside stall and returning to my hotel dusty and hungry for Christmas Dinner. 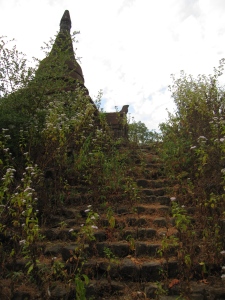 On Boxing Day, I hired a pony and cart to explore the further away temples and minimise the getting lost portion of the activity.  Towards the end of the afternoon, after a day where I saw only three or four other temple tourists the whole day, I was exploring the atmospheric ruins of a temple complex when I remembered.  I suddenly remembered that I had been dreading the approaching Christmas and its memories of not surviving to see Christmas 2009.  I remembered that I had been extremely fragile the previous year.  But something had shifted in my mind which put cancer to the side more than I realised and it completely slipped my mind.

Cancer is still very much in the forefront of my mind, and I am sure it will continue to be.  However, the fact that this memory of being so emotional and connecting it so clearly with Christmas has faded so much shows me clearly that my mind is healing more than I had realised.  For once I am incredibly thankful that I forgot something!