Rainy season, rainy season  good old rainy season!  Slowly, gradually the skies clear,the mercury rises and we enjoy slivers of sunshine.  This is the time of year when we might even see rainbows.

This is also the time of year when we are more likely to be caught out by surprise rainstorms as we think the sky is clear.  Tuesday morning saw an unusually hard downpour before I was due to leave home in the morning.  I left a little early to allow extra time. As soon as I walked through the gate I was confronted with a highly confusing picture.  Right in front of me, where the road should have been, I could see children splashing as if they were in a swimming pool or river.  Where our street gently slopes downwards, our little lane had indeed become a river!  Further down I could see men waist deep in water.  Apart from an inch or two of water, I have never seen our street flood, unlike many other parts of the city. Now it was completely inundated.

Incredibly, most folks were going about their daily business and wading through the murky water. Children being carried or clinging on to the back of a bicycle as they get a lift, quite literally, to school, and the monks continuing to gather alms.  All seemingly oblivious, at the most, slightly inconvenienced.  While I stood like a complete wimp at the water’s edge phoning my office and taking photos before I returned home to wait. 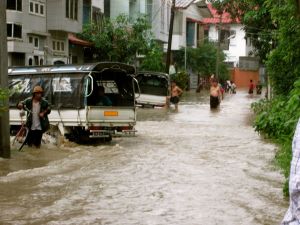 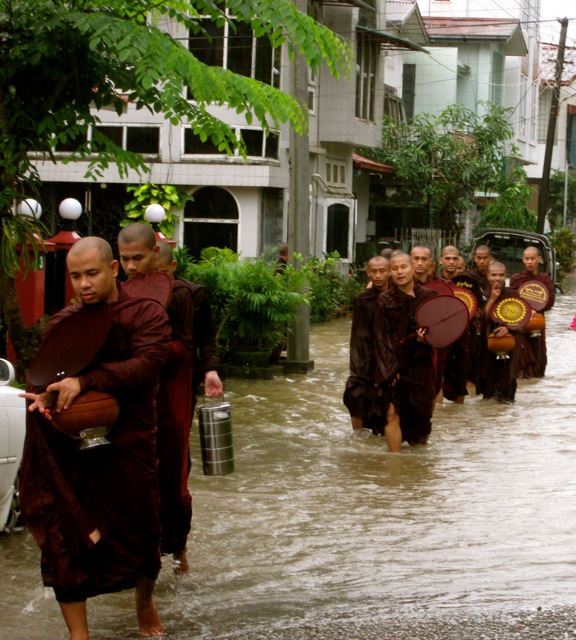 I was surprised that the waters receded fairly quickly, leaving major traffic jams and water-logged little cars stranded haphazardly around town. Soon there was little sign that the community had been inundated.

And amidst this, I feel emotionally inundated though perhaps it is not visible.  Work intensities take up enormous reserves of energy and time; I continue to strive to take time to smell the orchids, and have weekends and evenings filled with reading, writing and photography pursuits; working with a small group of women to organise awareness activities appropriately; swimming and cycling between downpours…….. In addition to that though, my mind is trying to assort and address some extras.  It is nearly 6 months since my father’s death and that is in my mind constantly, unexpected prompts catching me by surprise, yet feeling that it is too long ago for many to realise that the pain is so raw.  Healthwise, I am hurtling along “anniversary season”, having just marked the four year point from finding the lump, and being only 48 hours away from my four year cancerversary – the day that everything shifted and changed.  The day I heard those words “this is highly suspicious of cancer”. And just to add to the overflowing maelstrom in my head, I will travel to Bangkok for my Big Checks in just over a week.

There is not a great deal I can do, other than keep on swimming as the waters swirl around me, aware that Capt Paranoia is swimming towards me. I crave calmer waters and sunny skies.

For the moment though I must hold on to the thought that this inundation will also pass, in its own way.

It is Saturday morning and the week has again been a full and busy one. Plans for the weekend’s activities are a bit on hold due to a depression and intense monsoon downpours.  The rain has been heavy all night, thundering down outside my bedroom window. This morning our garden is sodden and pools of brown water are rising above the taller of the blades of grass.  Even the frogs and toads are silent, hiding patiently and saving their voices for the post downpour chorus.

We have had a heavier monsoon than usual this year.  Only two weeks ago I was caught in a sudden and furious rainstorm, while trying to get home quickly.  Floodwaters rose rapidly and I found myself retreating into a small space.

The reason for my hurry home was a good one.  My cohabitation with Twang Arm might have turned into a state of mutual tolerance, but that does not mean there is any love lost on either side.  I resent and dislike Twang Arm, which in turn continues to intrude into my life and takes delight in constraining my movement.  As those of use cohabiting with Twang Arms, know, this needs a highly specialist kind of physiotherapy to work to improve movement and reduce pain and unfortunately I have not been able to access such specialist physio here. 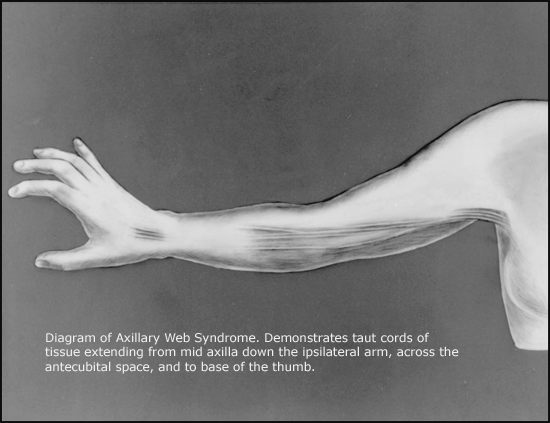 So I was delighted when I heard from a friend that a well renowned, specialist physiotherapist would be visiting Myanmar on a very short (6 day) holiday.  My friend made a special plea to Monsieur Le Physio to see me and explained about Twang Arm.  M Le Physio said that he would indeed try and fit in a session with Twang Arm and me.  We made tentative arrangements through email and just after he arrived, he called and we fixed an appointment time.  On the second day of his holiday.

He gave Twang Arm a thorough workout, apologising for the discomfort and recognising that this was indeed a fairly nasty dose of Twangery. He also gave me a routine of exercises to do 2 – 3 times daily to maintain an ongoing assault to weaken the Twang.  Even at the end of the session I had great movement although that was accompanied by the necessary bruising and discomfort that a rigorous de-twanging entails.  But I finally, after nearly three years, felt that a major attack had been unleashed on Twang Arm and that its position of strength would be significantly reduced.

M Le Physio said that my Twang Arm was indeed an impressive one, and that he would try and fit in another session before he left the country.  He would be heading out of town early the next morning, and returning on the Wednesday, to fly onwards out of Myanmar later that same day.  He promised to phone as soon as he landed in Yangon, and to fit in a session before his onward flight.  What a star!

Over the next couple of days I treated friends and colleagues to an ongoing compulsory display of Twang Arm’s new moves, to some very bemused and disinterested expressions. I got up earlier to fit in the extra 20 – 25 minutes of physio to my already early start.  All while waiting eagerly for Wednesday to see if Mons Le Physio’s itinerary would indeed be able to fit in another  assault on Twang Arm.  The monsoon weather also plays games with travel, with regular disruptions and even cancellations in extreme conditions so I knew that this was a fragile arrangement.

So when I got the phone call on the Wednesday, late morning that M Le Physio had just landed at Yangon airport, and would come directly to my home I was super-pleased.  Even if I did know it would involve pain!  I already had permission to take time for this health priority, so headed quickly to catch a taxi home.

But there was a problem.  The sky was dark and had already started unleashing incredible amounts of rainwater.  In front of my eyes the street was starting to flood. 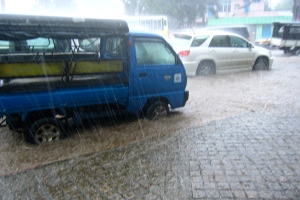 The rainwater was rising steadily and rapidly as I headed round the corner to the spot where I could catch a taxi.

The pavement was still not flooded, and there was a taxi there. In a matter of minutes, though the pavement was also underwater and the taxi was clearly going nowhere!

I retreated into the building behind me, which has a parking area on the ground level, and this is slightly elevated compared with the pavement level. And the water kept rising and rising. 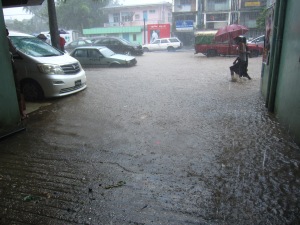 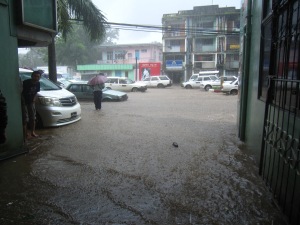 And I kept retreating further and further in with the cars in the parking area! 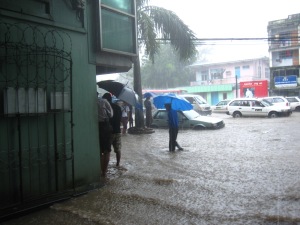 I was now getting really anxious about my appointment with M Le Physio – the airport is on the opposite part of town and I had visions of being stranded in a parking lot while he would be waiting fruitlessly at home.  Sabotage by Twang Arm?  Who knows!

I was very, very fortunate to see a friend starting to manoeuvre his four wheel drive out of the area and seeing me he asked if he could give me a lift.  More accurately, if he could rescue me!!  I leapt at the offer and in a few minutes we were cruising (every pun intended) through the floodwaters and to my part of town.  It is not far, only a 20 minute walk under usual conditions, but I could not even cross the road in those rains!

In fact, I arrived home even before M Le Physio got there from the airport, and so was able to have witness a second serious assault launched on Twang Arm.  This included a revision of the exercise regime and some straight talking with Twang Arm directly, as well as expert manipulation.  All contributing to a clear reduction of Twang Arm’s dignity and previous position of strength! M Le Physio reckons that with regular and disciplined exercise I should probably be able to regain up to 80% of my arm’s movement.  Oh did I just call it “my arm”?  Doesn’t that just show a rapprochement which could even lead towards reintegration of my arm into my own identity! Yes, it is a complex relationship that I currently have with Twang Arm!

After the session, M Le Physio had to rush off.  The rains had abated, fortunately, and he was able to leave without being drenched.  He had to return to the airport, this time the international terminal, for a flight on to Bangkok.  And from Bangkok he was flying to London…………

And he was flying to London on a very special assignment.  He would arrive there in time to meet up with the national team of the nearby country (where he is based) who were to be competing in the Paralympics, as the team physio. 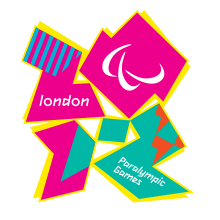