My hummingbird obsession is not news. However, it has recently taken a little bit of an unexpected turn. One which has led me to revise something which I thought was certain.

Outside our office, there are a number of trees where those beautiful little birds nest. I will always pause on my way in and out of the gate, to peer into the leaves and see what is happening in those nests. A couple of weeks ago, I was told that there were eggs in the nest and that the mother was keeping them warm. They would hatch in a few days, I was informed assuredly. Indeed, after a few days I saw eggshell on the ground and was told that I could very gently peep inside the leaves. Two wide open beaks stared back at me. Indeed, beaks can stare! 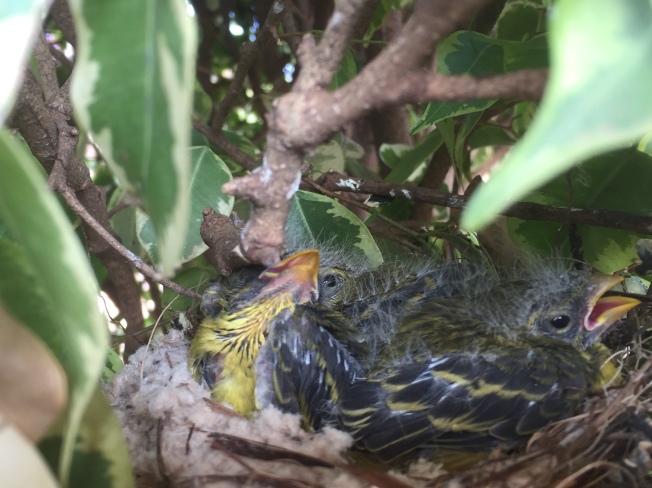 Over the following days, I would very gently peek in through the gaps in the leaves, making sure that my human eyes did not distress the rapidly growing birds. In no time, I learned that the little birds were almost ready to fly. They would fly on the Monday, in fact.

When I arrived at work the following Monday, I could see that the nest was indeed empty. The little birds had flown.

But the tale has taken an unexpected twist. In those few days while watching from a safe distance, I learned something new. I had been visiting friends, and they had bright flowers on their porch. The little hummingbirds, perched and manoeuvred to draw in the nectar of the brightly coloured flowers. I was enthralled by those “hummingbirds”. My friend showed me photographs she had taken of the same little birds, which she called “sunbirds”. I knew they were hummingbirds. She was equally certain they were sunbirds. Of course, I was right. So was she! Stalemate!

At such times, and in such times we are drawn to Professor Google. And my goodness, was I in for a surprise!

I have been completely wrong! In Ecuador, these little hovering birds were indeed hummingbirds and they have become iconic across the country. In Africa, however, despite the fact that they look remarkably similar, they are not hummingbirds. These little beauties are indeed sunbirds.

In appearance, they are incredibly alike.The males have metallic blue plumage which shimmers in the sun. 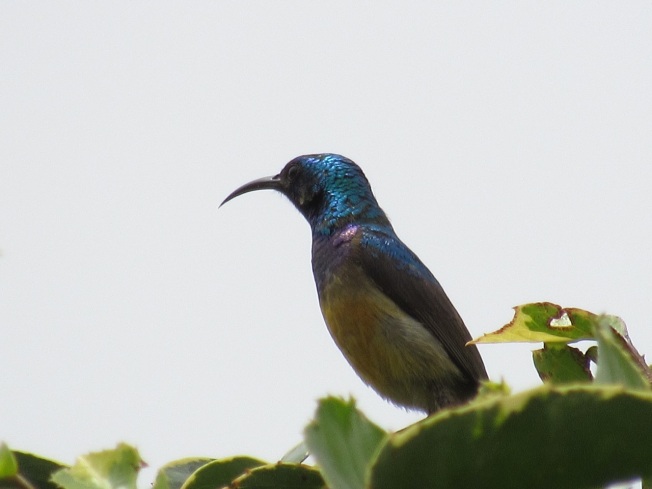 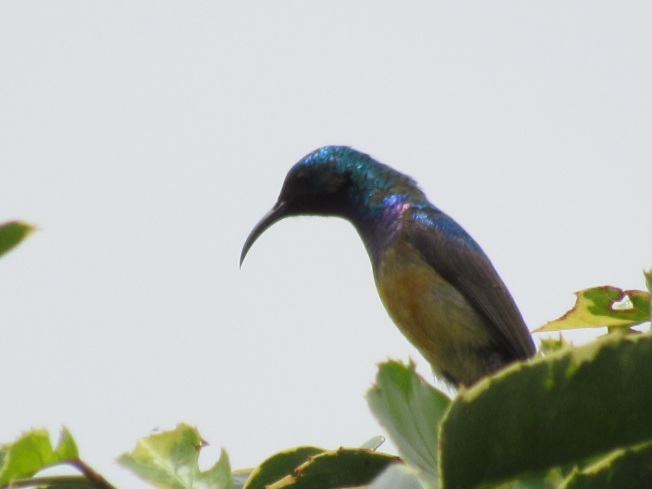 In Ecuador and in Africa. They both hover.

This little soul is hovering with all his might. So hard, that you can hardly see the blur that represents his little wings.

It seems that I am not the only one to become so confused between the hummingbird and the sunbird. From what I understand, the key difference (apart from the biological family differences) is that the hummingbird always hovers while it feeds. It can hover for a seeming eternity while drawing nectar fro the inside of a bloom. However the little sunbird, while it can and does hover, usually has to perch to gather its food.

However, that is what I truly learned from this. I was reminded that no matter how sure I think I am about something, I must be open to correction or rethinking. This is not about the sunbird. This is about how I view the world and my life. While I had been convinced that the birds I saw were hummingbirds, and my friend was equally certain that they were sunbirds, we both needed to be open.In my case, I also need to be corrected, because I was wrong!

The world around me is not as set and uncertain as I necessarily think. The universe is again shaking and shifting the ground underneath my feet. I need to revise and reset my vision of what I thought was my world. And that does not only apply to me. It is for each and every one of us. We just do not know what is certain and true.

As I was eating my breakfast quietly this morning, in this peaceful retreat, I was joined at the table by another couple. We started chatting a little, enthusiastic about the day ahead and our various plans for exploring, relaxing and creating. And that’s when I saw the plate of dragonfruit in front of them! I hadn’t seen dragonfruit since leaving Asia, I did not even know it grew here. We all know that dragonfruit hold a special place in my creative heart, but there was a striking coincidence in the sight of the fruit in front of me. And therein lies the whole reason behind my choice to come here for this retreat. A dragonfruit reunion and retreat.

Something unexpected, and very special came from the publication of the Dragonfruit Anthology in 2014. Not only was this the first time I had my writing published in a proper book, but furthermore the process of refining the writing in preparation for publication, and the connection with the Editor and other contributing writers provided a real sense of team and shared achievement.

We were a team of 27 women, including and guided by our Editor towards the result of producing a collection of our stories from our lives as women in Asia. Stories of our lives in a country where we were essentially guests, for a shorter or longer term. Our nationalities, situations and stories varied enormously, but we were tied together by the fact that we were all, or had been, women living in Asia as expatriates. It was fascinating to get to know each other through our stories and through email connection as we were kept up to date on the decision of the title, the reveal of the cover art and the lead up to the publication.

Just after we received our writer’s copies of the anthology, I received an email from one of the other writers. She had read my account of moving to Myanmar and being diagnosed with cancer. And indeed, I had read her tale of hurtling through the streets of Hanoi in the throes of labor on the back of a motorbike towards the hospital, and the (safe) arrival of her daughter. She had reached out to me because she and her family were moving to Yangon! “Once we’re settled in, if you have time, I would love to meet with you for tea one day” she emailed. And indeed we did. Yet, had it not been for our Dragonfruit connection, it is highly unlikely that our paths would have crossed in Myanmar over the two years of their stay. We would probably not have enjoyed those cuppas and chats, writing together or being part of the same book club. A wonderful connection, thanks to our Dragonfruit Anthology.

Fast forward by two years, to May this year. As it turned out we were both preparing to leave Myanmar as changes approached. I was packing to leave Asia for Africa, and I learned that she was leaving Asia for South America. For Ecuador. Along with her husband, she was embracing the opportunity to take on a new challenge. They would be running an eco lodge in Ecuador, something close to their hearts, values and beliefs. They were filled with enthusiasm and zest for their new adventure as she told me about it.

“You should come to the lodge,” she said to me. “It would be the perfect place for a writing retreat. Do come”.

What a fascinating thought, but hardly a likely venture. Ecuador is not close. It is further west than I have ever travelled. It is more than a day’s travel from Africa. Would it be rash to travel such a distance when the year has already seen such intensity, change and indeed long distance travel? Would it not be wasteful given that there is so much to explore on my new African doorstep?

These are sensible questions, but my mind is not so wise. The thought kept returning, that  this is an opportunity which might not arise again. That it is probably better to travel when health is reasonable as nothing can be taken for granted. And the sneaking reminder, that if I did visit Ecuador, then incredibly, this would be a year which would see me on no less than 5 continents. (I do believe that I have not travelled to more than 2 continents in any year in the past). How many grandmothers are able to do that? What a temptation…

So here I am, in a beautiful lodge, nestling in the hills of Ecuador, sitting on the balcony of what is now being called “The Writing Room”, tapping away at the keyboard with the steep green hills right in front of me, the sound of a donkey braying in the distance, the trees swaying in the breeze and in the company of blue grey tanagers. The creative silence of the past months is being lifted gently in these inspiring hills.

I could not resist the temptation of visiting such a new part of the world to me, and of bringing 2016 to a close in a peaceful and inspiring place.

If it had not been for our Dragonfruit connection, I simply would not be here now in this fascinating new land. Serendipity and the friendship of a kindred spirit have enabled this retreat to happen.

Like so many journeys, the one to get here was not an easy one, but  I am powerfully reminded of the importance of making that effort and seizing the day. These opportunities are  to be embraced and treasured. And will surely be long remembered.