Just over a week ago, we celebrated the full moon festival of Tazaungmon in Myanmar. Throughout the wettest days of the monsoon, between the July and the October full moons of Waso and Thadingyut, there is a period which is often called  “Buddhist Lent” in Myanmar. During this period, it is usual not to begin new ventures – not to start a new job or move house and not to get married. At the Thadingyut Full Moon (usually in October) there is a great sense of festivity and the city is bathed in lights and candles. The temples are packed and shops full of gift packs of monk robes and appropriate gifts.  The night sky is punctuated with lanterns floating upwards. 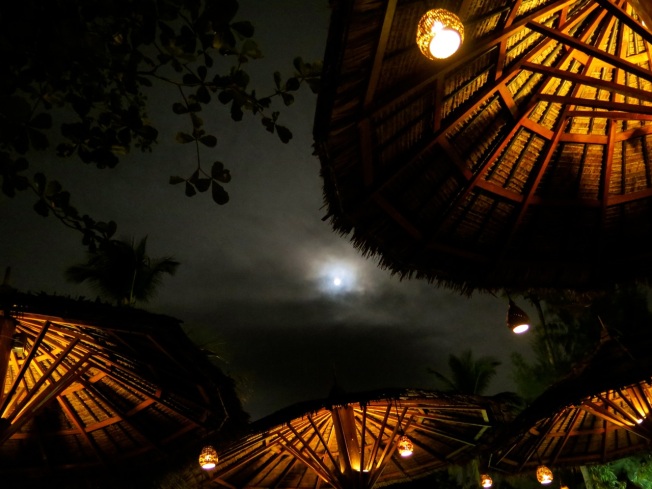 The whole month following Thadindgyut has a festive air, and as the next full moon, Tazaungmon approaches we see preparations for this festival. At the end of our lane a stall appears, with wooden frames where people pin brand new 1000 Kyat notes and other donations. 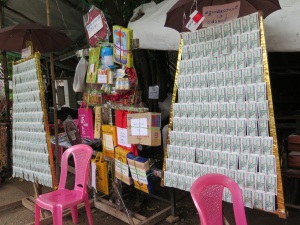 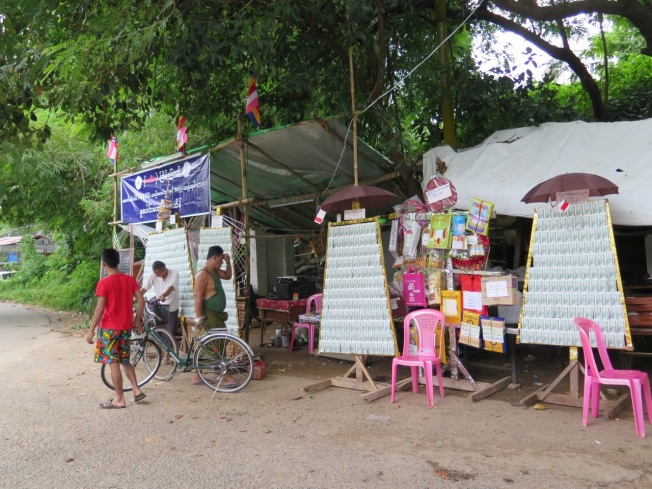 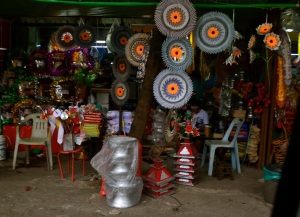 At various times, these are wheeled around the lanes and streets. I looked up one Sunday morning when I heard some lively music blaring from a megaphone, and saw a line of money trees and umbrellas passing along above the hedge outside. Quite surreal.

Last year I even saw a car with money pasted all over it, on its way to the temple to offer its donation. 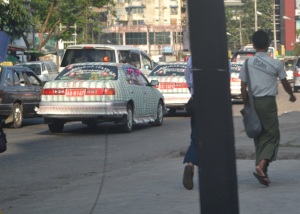 This year Tazaungmon fell on a Thursday. Which brought the opportunity of taking a day’s leave on the Friday and making a long weekend of it. Rainy season is usually behind us by this time which makes flying less of an ordeal for me and I could feel a relaxing weekend at the beach calling to me. A booking was quickly made and I continued to work flat out, secure in the knowledge that a peaceful break was ahead.

However, rainy season had decided to continue a little mischief and on the Tuesday we had some torrential downpours. By Wednesday morning, there was no break in the rains and the sky heavy and grey. This was far more like a Scottish November day than a Myanmar one! I had to visit the Clinic for my regular blood check and the streets were again waterlogged. I was glad I was not flying that day and relieved that there were 24 hours before my flight.

When I returned from the clinic things took a turn for the unexpected and unwelcome. Firstly I received a text message alerting me that a friend was considering cancelling their seaside break due to a weather system developing in the Bay of Bengal. At almost the same time, I received an email alert about the possibility of a tropical storm or cyclone developing. My stomach flipped. Partly out of fear (flying in stormy weather, danger if the system were to develop and were to head in our direction) and partly from anger at the injustice of my badly needed break being in jeopardy.

I desperately tried to get any information and advice, but it was consistently inconsistent! The storm was expected to weaken, or strengthen. It might head towards Myanmar or it might decide to tootle off towards India. Some folks were cancelling and others were pushing ahead with plans. I was utterly incapacitated and had less than 24 hours to make a decision.

Hence, on the Thursday morning, with the torrential rain continued to batter down outside, and a sky promising plenty more, I was perched on the end of my bed only two hours from the flight’s departure. I had hardly slept, had not yet showered, breakfasted or even dressed and was still nowhere near making that decision. The fact that everywhere was closed for the holiday did not help, and the only information I could glean suggested that the while the storm was strengthening it was predicted to head westwards, India-bound. Ironically I had persuaded a friend to join me at the beach, and now the situation was reversed as she encouraged me not to cancel.

I had nothing to lose and no further information, so within half an hour had finished packing my little bag (no point in packing the sunscreen or sunhat though), showered, dressed, breakfasted and was putting my umbrella in my bag and throwing on my raincoat to head to the airport and see if the flights were running.

The streets were quieter than I had expected, in terms of traffic,  apart from a few Tazaungmon trucks with Gangnam Style belting out from massive speakers draped with plastic sheeting and filled with young folks drenched and dancing, seemingly oblivious to the rains and their dripping clothing. 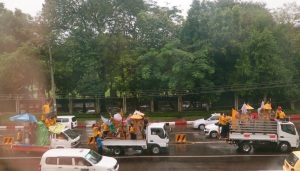 There was mayhem at the airport, the floors were slippery and there were crowds of people. I headed towards the check-in desk, pleading to the invisible that the flight would be cancelled. I had seen a forecast of rains and thunderstorms and hate flying in these conditions.

The fates had decided otherwise and when I approached the desk, I was asked where I was flying to. When I replied I was escorted immediately to the front and my bag taken to be weighed.

“But will the flight be all right?” I asked.

“Oh yes, it’s a new aircraft” was the reply.

“Fine in Thandwe. The bad weather is here in Yangon only”

And I realised I had a boarding card in my hand and my bag was being wheeled off on its own through security.

And so, it happened that I was on my way by default. The departures area was packed and many flights delayed, which did nothing to calm my agitated state. The ground staff from the airline I was travelling wore purple t-shirts so it was clear that one of the two flights they were running would be departing soon and sure enough, only a few minutes late, our flight was called. Getting up and moving to the departure gate reminded me of going to chemo. There was no way I wanted to be heading, but when bidden I would follow like a puppy. The rains were showing no sign of abating, and as the bus pulled up beside the aircraft we were met by a guard of honour formed by a line of airline-branded umbrellas. And then I was on the plane, questioning my lack of gall.

Take-off was predictably slithery but soon we were levelling off at 16,000 feet and travelling through a thick sky, surreally reminiscent of the frothy top of a cappuccino. Happily I had requested a direct flight (there is another long story in there – suffice to say that many flights in Myanmar fly on a kind of circular route and might have two or even three stops before you reach your destination). A forty minute flight with no extra landings and take-offs was about as much as I could handle.

As we descended into Thandwe, the light suddenly brightened in the cabin and I realised we were no longer in thick cloud. Vibrant green paddy fields, and thick jungle punctuated by winding brown rivers were immediately below and in minutes we were touching down on a dry runway. 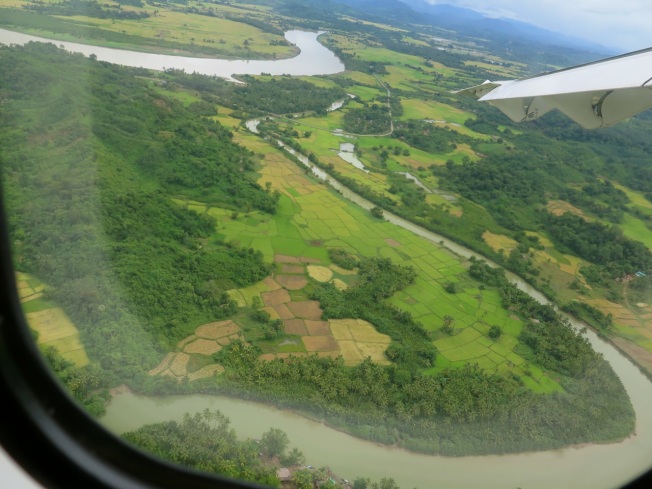 The sky was still angry and the usually azure sea was more grey than usual, but I had arrived and if truth be told, the flight had actually been fine. I did not need to worry about flying again for three whole days, by which time the storm would have decided what it was doing and where it was heading. 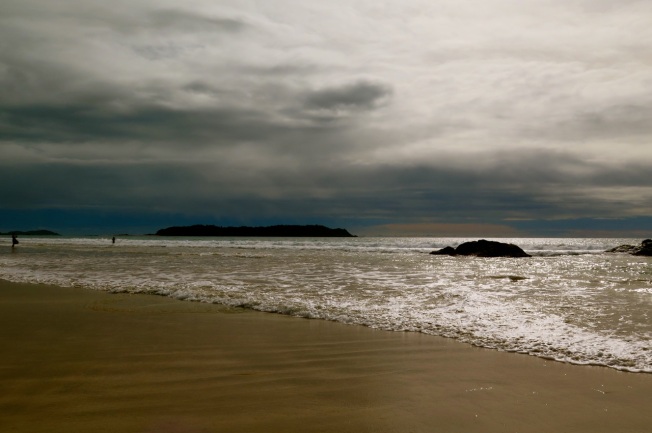 As it turned out, the storm did form into a cyclone and turned towards India, but weakened and fortunately did not cause as much damage and harm as it might have. Although the Friday at the beach continued to be cloudy, Saturday saw a dramatic transformation to blue skies and continuous sunshine matched with the realisation that it is never wise to make a decision about what to pack without being that bit flexible. I am happy in the shade, but still it would have been wise to have had sunscreen, and throughout the whole break my raincoat stayed in the room! The rest of the break passed uneventfully, which was exactly what I had been seeking, quietly reading, people watching, walking and swimming. 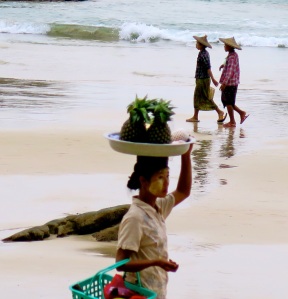 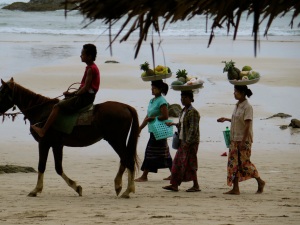 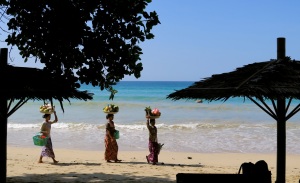 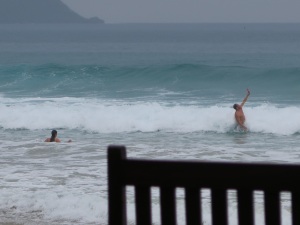 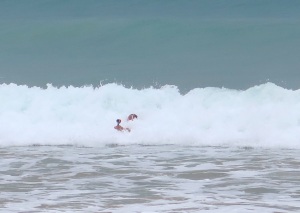 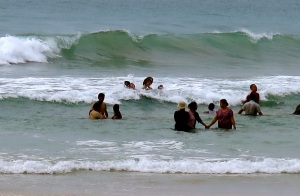 Traditional beach decorum – sea-bathing fully clad – these women were squealing with delight every time a wave washed over them! 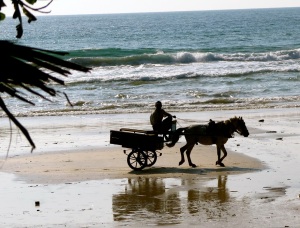 And of course, in no time I was on an equally calm return flight to Yangon and breathing in the sea air and holding on to the peacefulness of the previous days as I prepared for the week ahead. 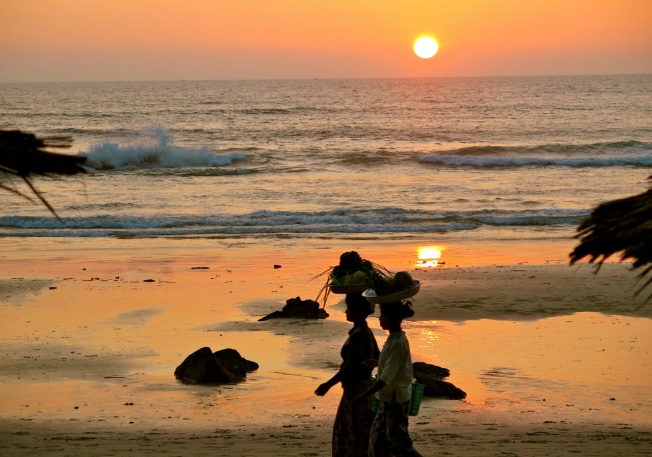