At the start of the year I came across a fascinating little calendar, made up of snippets of Eastern wisdom wisdom and spirituality. One leaf of paper for each day of the year, each one with its own insight or wisdom for the day. As I peel off a new one at the start of the day, I take a few moments to reflect upon the words there. I pause and let the saying sink into my thoughts and promise myself I will remember it. Of course, I never do. The words are soon forgotten, shredded by my feeble short term memory. Until, that is, one saying comes along which resonates so powerfully that it takes a hold and whispers in my ear at moments when it brings meaning.

It is so true that we wait for important things to happen to us – the perfect job, a relationship, even a lottery win. We focus on looking out for the thing we seek rather than making sure that we are in the right place to embrace what we are looking for. Or sometimes we are looking so hard, it passes us by without us even realising it. But we are like stars or planets, and alignment has to be right for both elements. If we want to be in the right space to engage with what we are seeking, we must be ready. We must focus on digging that pond, because otherwise the moon will pass overhead repeatedly and the pond contains no water. We will see no reflection or evidence of the moon. If we forget about the moon, and make sure the pond is ready, then the moon will come on its own. We have to be ready, and we have to be patient.

I have long been enthralled by the stars, the planets and the infinite cosmos. A young child, I remember hiding under the bedclothes one night almost fifty years ago now, with a torch, a notebook and listening intently to the radio. I noted down each magical detail and update, including those words which would forever capture the moment which made history “That’s one small step for [a] man, one giant leap for mankind.” Even at my young age, I knew that this was momentous.

We had no television in the remote part of Scotland where I was brought up, there was no signal or reception. More significantly, we had no electricity as the power line had been laid along the other side of the loch, where the old railway had run. We relied on our old battery powered radio, for news and information, and I grew up on a diet of the Archers, Desert Island Discs, Just a Minute with its rule of talking on a topic without hesitation, repetition or deviation”. The voices of Roy Plomley, Clement Freud, Derek Nimmo and many other household names were as familiar as family. Thus, on that memorable night, while it felt as if the rest of the world was watching the moon landing live on TV as it was beamed around the world, I could only imagine what it looked like as I strained to listen through the crackling and hissing to each incredible development. A little research this evening thanks to Professor Google advises me that, surprisingly, these events took place late in the evening US time, and in the middle of the night in the UK. I remember the thrill of knowing that this was a truly historical moment, and this added to the knowledge that I would be in huge trouble if my parents had any idea that I was wide awake under the bedcovers in my bedroom. Somehow, my misdemeanour was either not properly noticed or there was a recognition that my witnessing the first steps on the moon was not in fact a serious transgression. I kept that notebook with all of my scribbles, largely illegible, for many years.

Just a couple of years earlier I had visited the Planetarium in London. This was an important moment in my childhood as it brought the night skies to life in a way that sparked a fierce interest in the planets. I stared at the dome of the Planetarium during the whole performance as wonder after wonder was revealed. I was intrigued by the spectacle, unclear as to whether this was the actual sky or some impossibly sophisticated sleight of theatre which brought the skies to life. It was largely immaterial as it turned out. The main result was that I came out of the Planetarium impatient to explore the night sky for myself, an interest which I was to maitain. One major advantage of living in a remote rural location during my childhood, was the lack of light pollution right outside our door. On a clear night I would gaze upwards identifying Orion’s Belt, the North Star and waiting patiently for shooting stars. I always yearned to have a proper telescope so that I could see the stars and planets more clearly, but that dream has not yet come true.

It was many years later, almost three decades to the day after the lunar landing, that I was travelling by train from Moscow to Beijing to mark my own journey of forty years around the earth. We stopped in Mongolia for a few days and spent time out of the city in a national park, sleeping in a traditional ger. One night I had to get up to for a bathroom visit. The wash facilities were a short walk from the steps of the ger, in the dark, out in the massive expanse of the steppe. I opened the door and stepped nervously outside, ready to navigate my way slowly with a small pen torch. To my astonishment, I could see clearly across the landscape, the sweeping hills silhouetted against a sky opaque not with clouds, but with stars. The torch shone needlessly towards my feet. The arid climate of Mongolia and its label of land of eternal blue sky means that the night sky there is very special. The sky was overflowing with stars, the Milky Way distinct as it trailed lazily across the sky. Those stars were fascinating in their variety, some were little silver pinpoints, others were chubbier and of a more yellowish colour. Some clustered in families and others seemed to be jostling to join in an infinite number of groups and gatherings. That image stays with me to this day, and although I have since occasionally witnessed night skies of almost equal spectacle, that night was spellbinding. 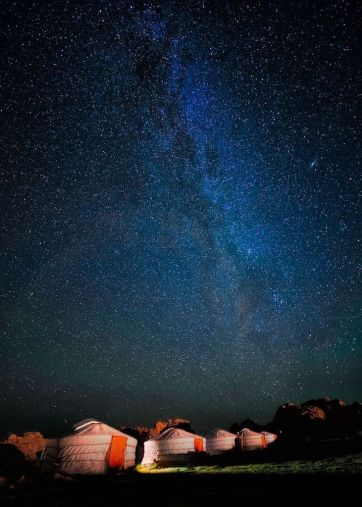 Despite this fascination in the skies it was only four years ago that I saw my first eclipse. I had tried on various occasions to witness one, but been sabotaged scuppered by either cloud cover or timezones. Even a promising total solar eclipse scheduled for my birthday the year I lived in Sri Lanka failed to produce any sight of the magic, as unseasonal thick cloud hid the sun hiding behind our shadow. I hadn’t realised that an eclipse was happening as I was on my home from work in Yangon, in 2015 when I was spooked by what looked like a new moon only a day after an almost full moon. That was my first proper eclipse and I watched it until the light brought the moon back to its proper waxing status.

Just a few weeks ago, there was a great deal more anticipation about the bizarrely named “super blood wolf moon” which would be totally eclipsed, AND visible in Scotland. My expectations were not high. The totality would last for some time, but with Scottish weather and no idea where in the sky the moon might be and whether I would have the wherewithal to remember to open my shutters and eyes in the middle of the night, I did not expect to see much more than everyone else’s photos in the morning. I was however, impressed by the number of friends announcing on social media that they were wishing for clear skies and setting their alarm clocks for the wee small hours. I decided to just wait and see. I would undoubtedly be up a couple of times for my regular night time backroom visits, so would just see what time those happened and whether the sky might be clear or not.

As it turned out, my first awakening was just before 3 am and my reliable friend “timeanddate.com” informed me that this just happened to be at the start of the penumbral eclipse. This is when Earth’s penumbra starts touching the Moon’s face. penumbra. All that was visible was a glowing full moon, in a clear sky. I sensed a promise of a sighting of this rare lunar eclipse.

It was over an hour later when I woke again, and roused myself enough to head again to the window. The promise held good, and I was treated to a clear view of our terrestrial shadow creeping across the surface of the moon.

I gradually removed myself from the window, shivering in the cold and snuggled again to doze a little while. This eclipse was making the most of the clear sky and its performance would last. Even totality would last for an hour. I must have had some kind of lunar sleeping sense programmed as the next time I roused from my light sleep it was ten minutes into totality. The shutters were open, the bright glow of the full moon had dimmed and there was that supernatural deep red light. The super blood wolf moon was hanging in the distance, a rich, warm red colour. In the January cold it resisted the advances of my camera even through the open window and this was the typical of the images I captured.

However, my memory has much clearer images, consistent with the numerous far better photographs online such as this one  on Wiki Blogs

As the clock moved slowly towards 6 am, the red colour had darkened and a tiny sliver of light appeared at the very edge of the moon as totality slipped away. My camera was more comfortable with this and the following images captured the transition from full eclipse to the full moon. 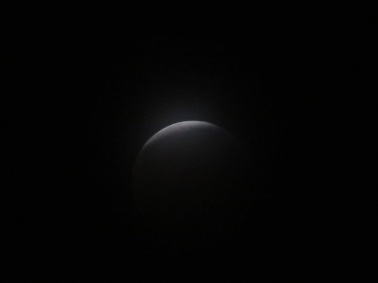 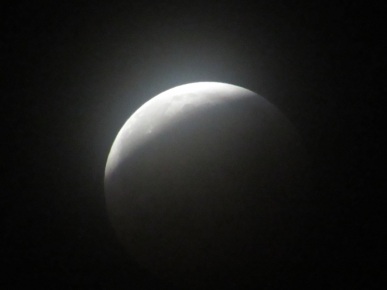 I returned to my bed as the light spilled in through the open shutters, my heart warmed with gratitude that the skies were so clear, and that my sleep patterns had allowed such a perfect viewing of the path of the eclipse. I was less thankful when the alarm’s shrill call woke me soon after as the working day was not prepared to wait until I was better rested.

I have now seen two lunar eclipses, and each time been enthralled. Apart from being completely in awe of the amazing calculations that are done to work out when these celestial events happen – and get it right, I feel such a sense of my own, and indeed mankind’s insignificance.

And moreover, I am keenly aware that throughout this fascination in astronomy from an early age, I have waited until these relatively advanced years to be able to watch this marvel. It seems that many years have been spent digging that pond, and now I am able to enjoy the moments when the moon indeed comes along by itself and shines brightly on those still waters.