I always approach birthdays with trepidation. Not because I am uncomfortable about adding another year to my age, but because our family has a strange relationship with birthdays and deathdays as I have written before, and birthdays make me nervous. So it was with great relief that I awoke on 2 August, the day after my birthday, fit and well.

Since my diagnosis, I have also begun a practice of doing something memorable for my birthday, and preferably in a country I have not previously been in. The foundation was set when I spent my 40th birthday in China and following years in Nepal, Thailand, India, Mongolia and Sri Lanka. In recent years, I have celebrated my aging in Myanmar, Cambodia, Malaysia, Luxembourg and Portugal. Given my new arrival on African soil, I decided to celebrate this year’s birthday by visiting a nearby national park and hoping for close encounters with African wildlife.

This post will be one of images and memories, with a sprinkling of narrative and description. Fortune smiled warmly on me, and I was able to see many animals and birds. For some reason, the hippos were out in force and I saw too many to count! Some were peeping out of the water, some were wallowing and chatting in groups, and some were wandering. Most were in the company of a white egret. The perfect hippo bird combo to wish me a corny hippo-bird day!

I stayed in a Game Lodge, on the border with Tanzania and in the park, and was greeted by baboons as we drove in at sunset.

The Lodge’s printed information provided valuable guidance on “How to behave around baboons”.  Just as well as they were very active around the grounds. 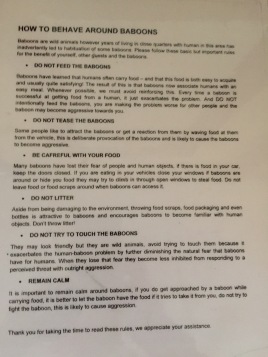 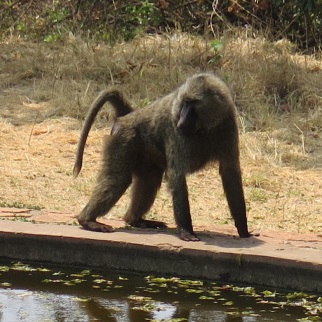 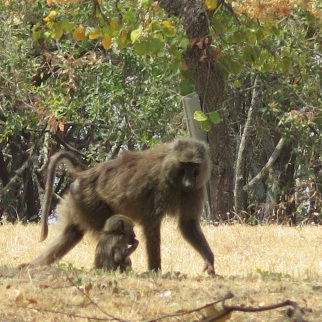 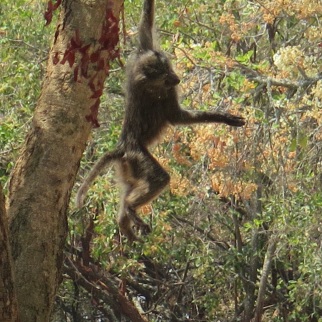 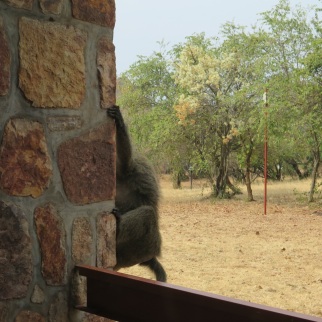 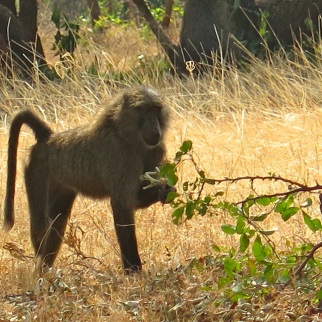 On the first morning, I was wide awake, clutching my packed lunch and prepared for a game drive as the sun was rising across the savannah, reflecting on the lake. You just never know what the day will hold and whether the birds and animals will be shy or sociable. 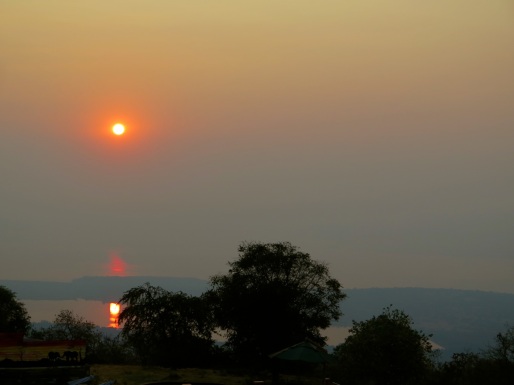 There is a small population of elephants, and these are rarely seen so we were lucky to encounter a lone elephant feeding in the trees. We knew he was not alone as we could hear crashing in the undergrowth, trees snapping and shifting of the vegetation. The rest of the herd was shy though, and it was not long before our friend turned and headed towards his friends and out of visibility. A highly promising start to the day. 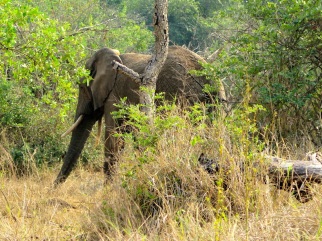 We continued along the dusty track, pausing to watch velvet monkeys, a group of baboons, fish eagles, impala, bush bucks and we even spotted a very large crocodile hiding in the brush. 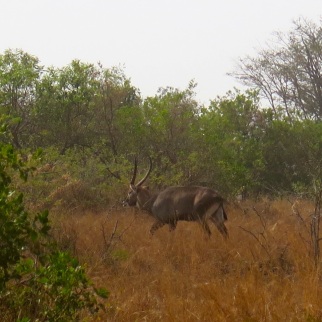 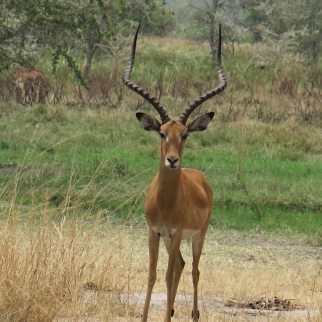 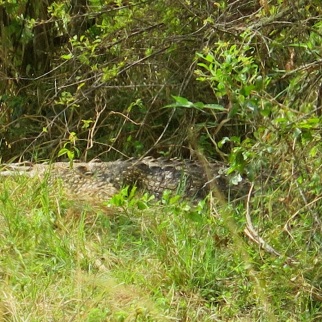 Having lived in Asia for so long, I find the African wildlife fascinating, in particular, zebra and giraffe which are so different. We were only a couple of hours into the drive, when we saw a group of zebra in the distance and soon afterwards we spotted a small group of giraffe.

As we headed northwards, we encountered more groups of zebra, an increasing number of hippos and 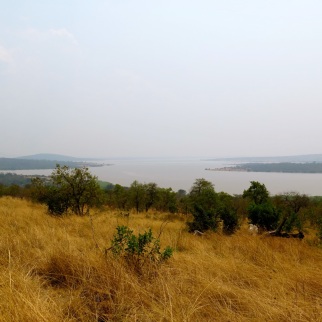 Looking across the savannah 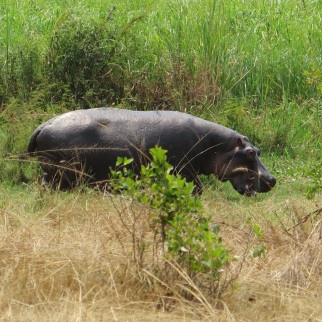 A hippo in search of a wallow

It was nearly lunchtime, when we reached flatter plains and numerous herds of animals – zebra, giraffe, impala and bush bucks. And in the midst of the plains, nestling under a tree in the distance was the king! Watching quietly as zebra grazed nearby, the unmistakable shape of a lion. 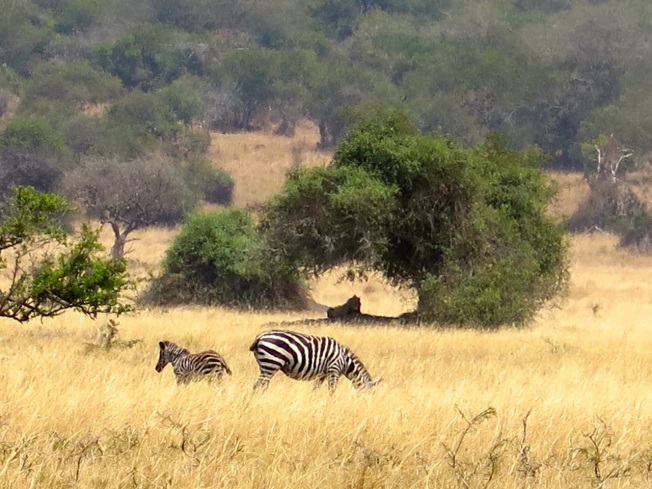 I could not believe our good fortune. It had been a full morning, driving, watching and taking photographs while counting my blessings and I had not realised that it was well into what would be lunchtime and I was feeling decidedly hungry. There is a designated space for picnicking, under the watch of kingfishers, hippos and supersized thorns so we ate quickly and were soon back on the track.

There was no pressure to spot wildlife on the drive back, and we continued to see a variety of birds and beasts. I was especially drawn by a little rainbow bird, and spellbound when he decided to fly off displaying bright blue plumage.

We are in the midst of dry season, and the grasslands are clearly parched. There are large areas which are smouldering. A strange place to see herds of zebra, but apparently they feed on the burnt vegetation which provides essential minerals for their diet. 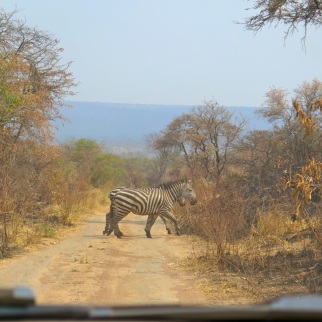 Who are you looking at?

The following day, I decided to take a boat trip onto the lake for a different perspective on the life in the park. As the sun sank in the sky, I joined two other tourists on a small boat and took the waters. We were again gifted by sightings of various birds – snake bird, fish eagle, cormorant and their friends. 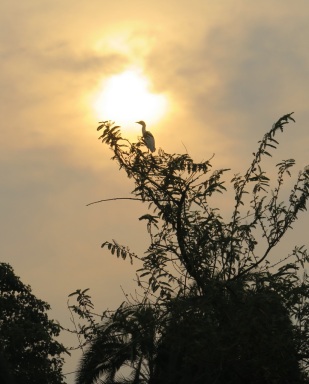 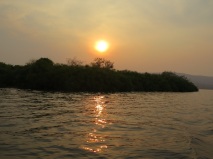 The larger creatures too, watched from their comfortable places, including a baby crocodile.

And just as the boat drew back towards the jetty, two hippos decided to peep out of the water very close to us, apparently smiling warmly. Our boatman was less convinced of their friendliness, and gently moved back into deeper water. Hippos are the second killers of people in Africa, and he clearly wanted to ensure they were not disturbed or aggravated.

As dusk was falling, I returned to the Lodge with a warm glow of happiness. I had been gifted with so many sightings and encounters and was extremely happy with my safari birthday. But my lucky streak was still not over. Through the trees, the driver spotted a group of rare blue monkeys in the trees. They are shy and elusive beings, and did not pause for their portraits to be taken, but I was able to capture their sighting briefly.

As I complete another journey around the sun, I again have to pause and reflect on the good things in life, and especially in my life. It has been a truly hippo bird-day! 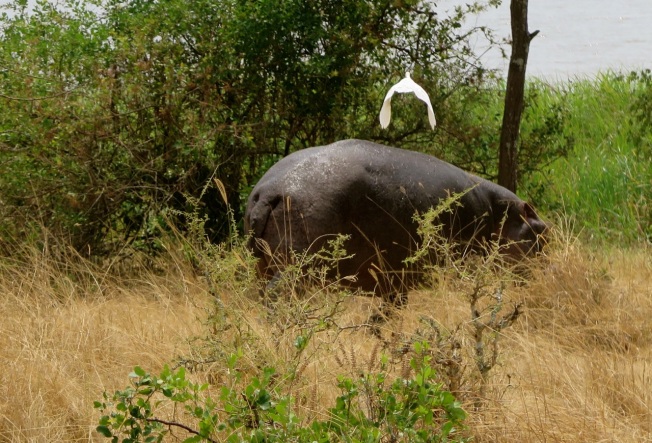 An egret prepares to land on his hippo, creating that hippo bird combination!

And a strong remind to Carpe diem. We just never know what is ahead. For now, a peaceful iconic sunset is the best way to mark that appreciation. 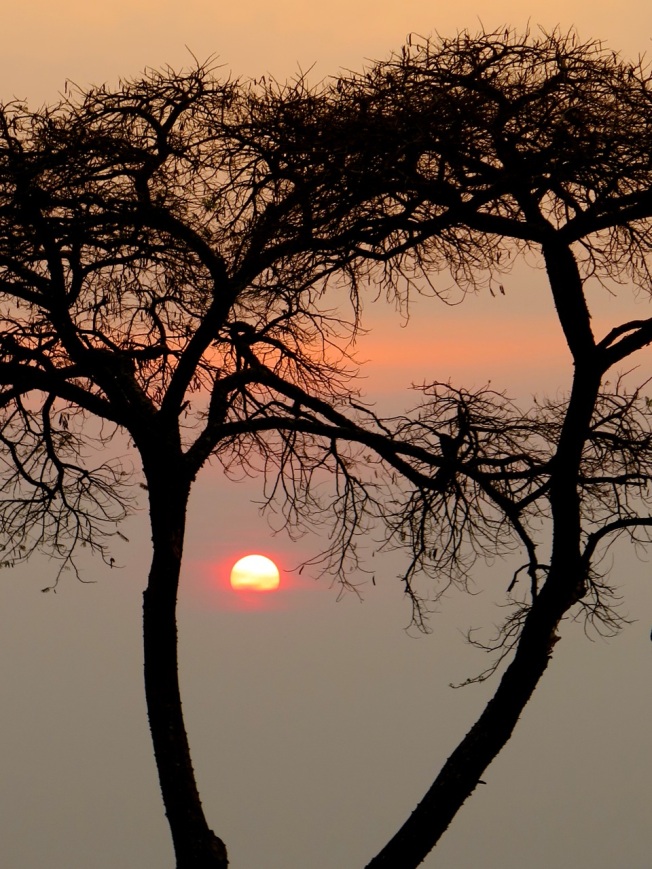