I really don’t wander around Yangon’s downtown nearly enough. When I do, I remember how much I love it and how much it is worth braving the standstill traffic, the slithery pavements in rainy season, the burning heat in dry season and the uneven pavement traps after sunset. So the perfect time for a wander is late afternoon in the dry, slightly cooler season. Two days before Christmas………. and before I retreat into a much quieter space. 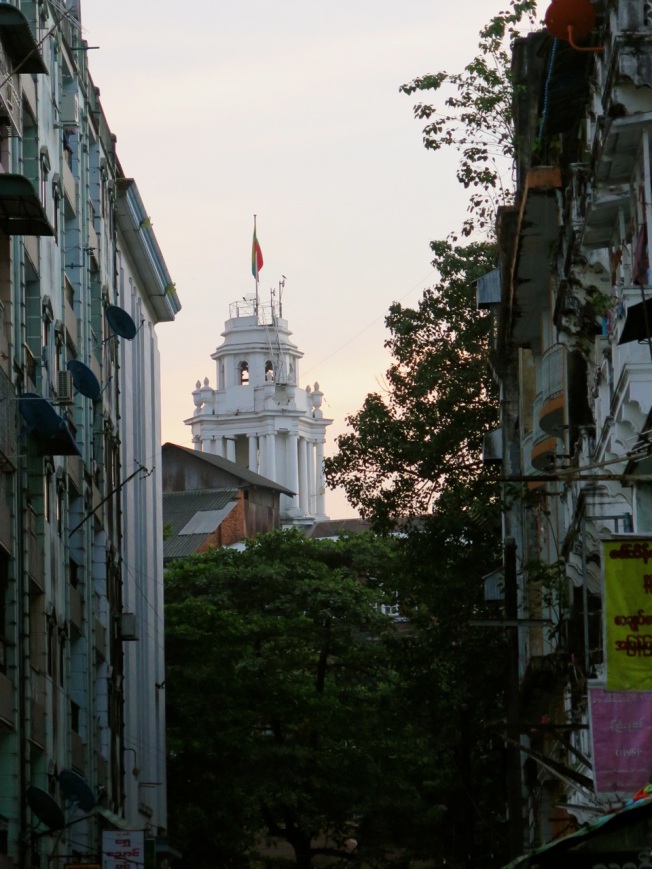 Last year I compared the thought of a break with jumping off a speeding roundabout.  The same still holds true, possibly even more so with building intensity through the year. Last year I retreated to Borneo for a quiet reflective New Year.

I spent a lovely, quiet, quirky Christmas in Yangon.  Starting the day with a long, luxurious swim and then Christmas Dinner in the company of friends, followed by a film shown on the hosts’ outdoor terrace under the stars.

A wonderful way of slowly winding down. 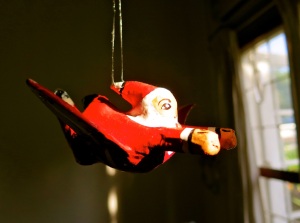 Boxing Day, 26 December saw me coaxing my long suffering travel bag to close, and heading yet again to Yangon Airport for a Bangkok flight. My next round of medical checks will be on 8 January so now I have some time to step right off that roundabout and wind right down.  I will fly this afternoon to Laos and spend the days before and after the New Year in a quiet, secluded place in the hills surrounded by jungle, waterfalls, butterflies and long walks.  This year I am truly stepping away from the 21st century for a little while as there is no internet, no distractions.

I trust that I will be in a relaxing and inspiring place physically as well as emotionally.  Perfect for walking, swimming if it is not too cold, reading, writing and thinking. And I am well equipped. 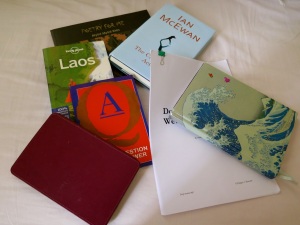 I will refine my three words and share them when connectivity permits. They are nearly in place, but need those few days of quiet reflection before I fine tune and share.  Soon.

As 2015 approaches, I send wishes for the coming year and beyond, to be filled with light, sunshine, laughter, music and kindness for all.

We are reminded that lie is fragile, precarious and precious especially in the past few days. I have lived in many places in my life, and the most years I have spent in one spot happens to be Glasgow.

Glasgow is city of extraordinary people.  A city of humour which makes my sides ache, quips and comments in the everyday chatter which are insightful and so often wickedly funny.  A city of rich diversity and resilience.  A city of culture and kultyer. A city of unique fabrications and real wits such as Rab C Nesbitt, Rikki Fulton and his Reverend I M Jolly, and Billy Connolly.

It is a cruel and random tragedy which strikes the city and its people days before Christmas, in the heart of the festivities. A city which is one of the most “alive” I have ever lived in.

Now the Christmas lights have been switched off and the flags flying at half mast.  Candles have replaced the lights and flowers cover the area which had been designated “Glasgow loves Christmas” with events, shopping and festive Fun in the heart of the city.  Now the people of Glasgow are holding each other close and digging deep into their resilience. 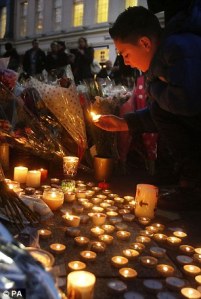 No matter where we are in the world, whether or not we celebrate Christmas, we must remember to hold our loved ones close.

Humbled and extraordinarily “chuffed” by this feature on The Displaced Nation. 🙂 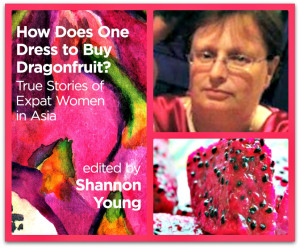 First of all, if How Does One Dress to Buy Dragonfruit? True Stories of Expat Women in Asia isn’t on your Christmas list, it ought to be. As regular Displaced Nation readers will know, Dragonfruit is a new anthology edited by columnist Shannon Young. Shannon has been sharing a few tasty morsels with us over the past couple of months, and we have been repeatedly amazed at the window afforded on Asia by these expat women writers. This is the third installment. The first can be read here; the second, here.

For this month’s excerpt, I’ve chosen a piece by Philippa Ramsden. A Scotswoman, Philippa is a development and humanitarian professional, writing in any leisure time. She had been to Asia only once when she stepped…

At this time of year, I am always caught by surprise by the sight of snowflakes falling across my home page.  I found this seasonal (well, northern hemisphere seasonal) function years ago, and switched on the “let it snow” feature.  Every December since then there have been snowflakes falling on tropical vegetation and other background images.

Once the snowflakes start falling across the screen, I am usually working my way through another annual process.  The three words.  Any “down” time, such as sitting in a taxi, waking in the middle of the night or other time where there is a space for reflection I am thinking of the past year and the coming year.  Have the words worked well this year?  How do I want to approach the coming year.  Which words will capture my aspirations and guide me as we move into the new year?

This 2014 has brought its challenges and intensity, some of which had been hinted at, some unexpected and some less welcome. As the year closes, I will have brought my reflections together and turned my focus to the coming year.  Already, the mantra is taking shape and words are dancing around.  I know, though, that the decision comes later, that the words form their own shape and settle together as the time to set the mantra approaches. 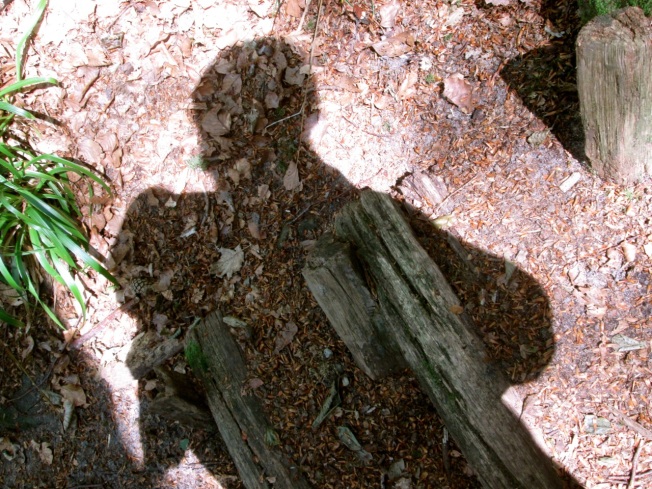 Nearly twelve months ago I shared my 2014 words, and now already I am preparing for their successors.  And I find that this process is as relevant and meaningful for me as it was when I first chanced upon it in 2009. And for as long as it works, so shall I keep living with and through my three words.

I wonder what the internet has done to my mind. In those days when we used to read, make phone calls, write letters and talk to each other, I wonder what were the stimuli for those cerebral wanderings which nowdays a Tweet or Facebook post prompts? Did I even have those wanderings? I am sure I did, I just wish I could remember their nature. Perhaps thanks to the internet, this particular train of thought has been prompted and allowed to take life. How much of our thinking is shaped and changed by the way we receive information in this day and age?

Yesterday, over breakfast I scrolled through the previous evening’s updates and Tweets and was taken by a Facebook conversation about toasters. Yep, toasters. Those handy little machines which churn out yummy toast at just the right level of toastiness according to our toastbuds.  Most of the time.

“So apparently the numbers on the toaster are minutes? I’ve thought for years that it was the degree of toastyness”

And there followed an outpouring of incredulity and shock at the exposure of one of those unshakeable and fundamental “truths”. There was indeed consensus that the numbers on toasters were widely believed to be settings of toastiness and obviously the higher the setting the toastier the toast would be. For the numbers to attribute to minutes was indeed a strange and disturbing thought.

So there followed, on my part, a deal of butterfly-type rumination of this new “truth” accompanied by a small amount of research thanks to Professor Google and sifting of my own memories. I have so many recollections of toast, whether it be too pale or burnt along with the acrid smell of burning.  I have more memories of bread under the grill, smoking, tiny flames flickering upwards as I had forgotten to keep my eye on it yet again.  And hazy memories of warm evenings in my childhood with a toasting fork in my hand, holding the carefully pierced bread over the low flames of the log fire, and producing perfectly brown toast.  After many attempts. 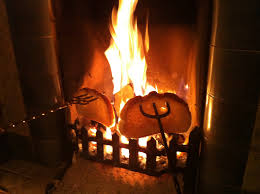 Eventually, I realised that the question of toastiness and toasters was in fact a fairly shallow matter. The settings most likely relate to time rather than specific minutes. Obviously the longer the time, the more toasty the toast will be. Toast makers have presented this as a toastiness range though, and we have absorbed this as our reference. So the issue is not as earth-shattering as it might have been. But nonetheless, for a short time, and even for such a mundane and shallow matter, my truth and certainties were blown to the wind. And over a fact which I had not even registered as a fact in my mind previously.

And that is the essence of this discussion. There are so many tiny and not so tiny things which we assume to be true yet many are purely assumption and not based on any fact. Even the rocking of a small point of certainty disorients and disturbs. Many of our significant beliefs or assumptions, we do not even know we hold. I thought my parents would live for ever. I thought I would live for ever too. I believed that our family did not get cancer. Being diagnosed with cancer could not have been further from my radar. I had taken as assumption and turned it into a certainty, which was destroyed.

In the case of the toastiness question, I had in fact been deceived into believing for a short time that a fundamental truth had been compromised, where it turned out to be trivial and inconsequential. Sadly the same is not so for so many other truths and certainties which we hold.