“Travel writers seek out wonders. That’s our job. It always has been — and always will be.”

From the opening sentence I was on the edge of my seat, listening attentively, taking notes and nodding like the classroom swot.  Rory MacLean’s words were resounding in my head. Indeed we do seek out wonders, in so many ways.  I know I am not exactly a (budding) travel writer, being based in overseas countries rather than journeying as such.  However, much of my experience is very similar, observing, smiling and reflecting on the little and not so little details of what is new and different around me.  The tiny details which you almost miss, as much as the grand, well-known wonders.  Although I have been in Asia for over a decade, I still have that sense of novelty and delight in my surroundings and the innumerable wonders which are there if only you open your eyes and mind.

This was my first session at the Irrawaddy Literary Festival.  The event which had been unthinkable until a few months previously, and the three days which had been fiercely protected in my diary, only to be sabotaged by a nasty stomach bug. I was still feeling somewhat delicate on the second day of the Festival, having missed the full first day due to the wicked bug.  Gingerly, I joined the audience late in the morning to listen to three writers  Rory Maclean, Caroline Courtauld and Monisha Rajesh talk about Travel Writing.  And I was hooked from those opening words, listening to these authors talk about their work and their differing approaches to seeking out wonders to share in their writing.

They shared insights, anecdotes and techniques and I scribbled furiously.  The future of travel writing was explored, given that the physical journeys have pretty much been travelled. How can a travel writer then focus on new wonders? The writers talked about the importance of reflection in travel writing, in describing an experience using all the senses and not only visual and the facts.  There is no wonder in recording basic facts.  Do photographs make us lazy? The beauty of travel writing is in enabling the reader to re-live the wonder which enthrals the writer.

I was able to speak briefly with the writers after the session, which added to the inspirational mood and set me up beautifully for the remainder of the day.  I was already forgetting that I missed the first day completely!

From the time I first saw the information about the Festival, I was blown away by the calibre and number of the writers who would be there.  I was particularly excited about a session on narrative fiction with a writer I had not known about – Akash Kapur along with two names very prominent on my bookcase.  Thant Myint U and Pascal Khoo Thwe, both are authors I worship.  One of the first books I read after being posted here in Myanmar was The Land of Green Ghosts by Pascal Khoo Thwe and I have read this once more since then, as well as gifting the book to several friends.

It provides a wonderful insight into Myanmar traditional and rural life, and is an utterly engaging and compelling memoir of a young man from a very remote part of Myanmar.  Pascal Khoo Thwe now lives in the UK and in fact has only visited Yangon three times in his life!  He shared beautiful insights and details, and one which stayed with me was his account of arriving in the UK.  He told us that he arrived in London after a long flight from Bangkok and was most disoriented.  The plane landed in thick grey cloud, and after he was met he was taken onwards on the London Underground.  He told us that at the forefront of his mind, was the voice of one of his grandmothers.  She maintained that on death, we move on from this world to a place where the sun is unseen and people live underground! You can see why I love his book so much.

As this session was coming to an end, people were getting up and leaving early.  We knew why.  The next session, due to start as that one came to a close was an audience with Daw Aung San Suu Kyi and there was a palpable sense of anticipation.  My friend and I did not leave the session until it was completely over, we were enjoying every last word, and also did not like to give a message that this session was in any way less engaging.

Of course, we had planned to listen to her talk though, and we trotted on over to the room where it was to take place. And we were not alone.  There were hordes of people and we soon discovered that the room was full and the doors shut.  However, the word on the lips of everyone in the crowd was that she would address everyone on the Terrace after her audience.  The Terrace is lovely, but hot, and exposed to the scorching afternoon sun.  When you add that to the fact that I would not see anything thanks to my short stature, and that the crowd was growing by the minute, my friend and I decided to step away and head for a cup of tea in the cool and shade. 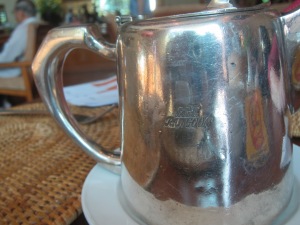 Our tea arrived, and I glanced up to see some new activity a few feet away.  A group of photographers and TV cameramen were tripping over themselves and each other as they scurried backwards in our direction.  While the crowds were outside or in the main lecture hall, we were in the tea room and suddenly, the Lady was walking right past us! Sometimes things are just meant to happen.

And at the end of her address on the Terrace (which we could hear, but could not see) she walked back past us.  This time the camera scaffolding was not there, just a few people and by pure luck I caught the moment where a young girl briefly grasped her hand.

So unexpected, and very special.

She was due to speak again later, after the Orwell Lecture which I also attended.  The final session was a panel discussing “Desert Island Literature”.  The writers on the panel was a treasure trove of writers – it was truly astonishing to see William Dalrymple, Jung Chang, Vikram Seth and Aung San Suu Kyi and Fergal Keane (moderating) sitting together. I was completely star struck. Each with such an impressive presence. Jung Chang, whose “Wild Swans” is another book I have read twice (a rare phenomenon) and Vikram Seth whose epic “A Suitable Boy” also sits in a prominent place on my bookshelf. How a man with such a slight and small physical stature can produce works of the enormity of “A Suitable Boy” was an irreverent thought which made me chuckle!   Tiny man – HUGE book 😉 Enormous personality and charisma. 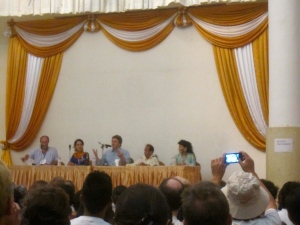 The panel discussion was fascinating and moving, and provided insights into the lives of these iconic people. I held on to every word, still scribbling into my little notebook, so that I would not forget little snippets of treasure.

I had been surprised and delighted to be invited to the Gala Dinner that evening, so rushed home to change and returned in time to mingle and chat with writers, friends and literary aficionados.  Surreal and wonderful.

Sunday was just as inspiring.  I chatted with writers, listened to powerful and emotional readings, had copies of my books signed and was humbled by the modest and supportive words from these well known authors.  I bought more books.  Because you can never have too many, and because I had become acquainted with new writers and wanted to read (and own) their works.  The day melted, and as the sun sank over Inya Lake, there were many exhausted and contented smiles.

Listening to poetry at Irradaddy LIterary Festival, as the sun sets on Inya Lake

By the end of Sunday, I had forgotten that I had been so ill and missed the whole of the first day, because there had been so many special and memorable moments.

Another incredible and inspiring event had taken place, and I had been fortunate enough to be at the heart of it.

And inspired to continue in my quest to seek out wonders.

9 thoughts on “To seek out wonders….”