The decision to travel to Chiang Mai by overnight train was an obvious one, truly representing adventure.

I have always loved train travel.  The longer the journey the better, and the more exciting.

When I was 15, I went on a school trip to Italy and we travelled there by train.  That is quite a journey from Scotland and was a real adventure.  Along with my school pals, we stayed up most of the night as we travelled through Switzerland, in awe at the lights we thought were stars, and then realised were houses high up in the mountains.

The following year, I visited my pen friend in France and again travelled there by train, but this time alone.  I am quite astounded at the confidence I had then, and can now well understand my mother’s anxiety at my insistence that I would be sensible and careful.  Indeed, she gave me money to catch a taxi across Paris between the train stations.  It was only many years later that I confessed to catching a bus and saving the extra for spending money!  I loved the journey, catching the overnight train from Stirling to London, the old boat train to Paris (oh those were the days) and then on to Brittany.

The romantic notion of the train stayed with me and I longed to buy an Interail ticket when I left school.  These wonderful tickets were available to under 25s for travel to most European countries for a crazily small amount of money.  I dreamed of Interailing to exotic places like Prague, Vienna and Budapest and further afield to the Scandinavian countries and even former Yugoslavia as it was then. For a variety of reasons this was not to be.  Domestic responsibility and lack of money meant that I passed the magic 26 year birthday threshold without being able to get that Interail ticket, something I have always felt very sad about.

A few years later, when I was studying at university (as a mature student) I spent 3 months in Belarus.  The country had just become independent following the break up of the Former Soviet Union.  To get there, we flew to Moscow and then by train back towards Western Europe.  My goodness, the Russian railway system is incredible.  Extremely well organised, and covering unbelievably long journeys.  Our overnight into Minsk was really just a little hop when you placed it alongside the journey eastwards towards Siberia.  While I was in Minsk I travelled with my fellow students, to St Petersburg, to Kiev (now Kyiv) in the Ukraine, to Poland and even to Vilnius in Lithuania for the day!  I was captivated by the long distance train travel, and particularly dreamed of one day travelling on the Trans-Siberian Railway into Mongolia and onto China.

I never stopped dreaming of long distance rail journeys.  So much so, that as I approached a certain milestone birthday over a decade ago now, a madcap idea took root in my mind. Rather than have a bit surprise party like many of my contemporaries, which I would have to drop hints about to make sure that one was planned for me, I wondered why I could not fulfil my pipedream of travelling on the Trans Siberian Railway.  The more I wondered why I could not, the more I realised that there was no good reason why not, and many good reasons why I in fact could.  I had also in my mind, a fantasy to see “those funny mountains” in China, the karst formations in the Guilin area .

The fact that one of the routes of the Trans Siberian ended in Beijing added weight to this becoming a realisable venture.  Cutting a long story short, I indeed spent my Big Birthday on this trip of a lifetime.  I boarded the train in Moscow one Tuesday afternoon and travelled further east than I had ever been.  Every kilometre I travelled took me further east and I crossed into Asia for the first time of my life.  We passed a white stone obelisk marked Europe on one side and Asia on the other.  Gradually the faces changed as we travelled eastwards, crossing time zones, as we continued through Siberia, into Mongolia and then into China.  The journey takes 7 nights, if you don’t stop off on the way.  My journey from Moscow to Beijing lasted 15 days with a couple of stops at the Lake Baikal area of Siberia and Ulaanbaatar (Mongolia).  I then travelled onwards and spent the day of my birthday cycling alongside the paddy fields at the foot of “those funny mountains”.  It was a marvellous journey, a true adventure and I loved every minute of it.  It had been intended to cure me of my wanderlust, but the fact that I applied for a job in international development only a few weeks after my return is a clear indication of how successful that was.  After this taste of Asia, I arrived in Nepal a few months later on what was to be the start of over a decade living and working in the continent.

So with this history in mind, and the past year which has seen me hardly able to cross the street unaided, you can imagine how important a step this adventure to Chiang Mai has been for me. It was a symbolic giant leap forward for me, even in the very attentive care of Thai Railways and hubby J – and of course NED.

I think that Thai trains are actually perfect for this kind of adventure.  The railway system is well organised, it is straightforward to book tickets and get information and the trains are very comfortable.  However, being Thai, it has that inherent exotic essence that British Rail can never have.  Booking our ticket to Chiang Mai gave me butterflies in my stomach in a way that I had forgotten.  I am used to an anxious type of apprehension over the past months, and this was very different.

I boarded the train like a child, preparing a little bag with essentials including a book, i-pod, snacks and camera.  After a couple of hours, the train staff came through the carriage, making the seats into very comfortable beds.  They made the beds, and even hung up little curtains so that there was complete privacy for every berth.  I have to say that I have slept in much smaller hotel beds in my time and my lower bunk berth was just about the same size as the EasyHotel room I stayed in last summer! 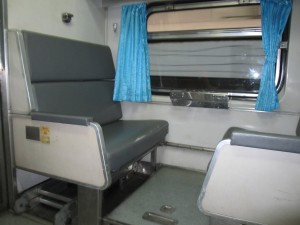 We rolled gently northwards overnight through the Thai countryside, waking to rainforest and misty jungle a couple of hours before we pulled into Chiang Mai.  And the best thing about it?  At the end of our break in Chiang Mai I had the whole experience to look forward to all over again!

Now back in Yangon, I look back on my adventure to Chiang Mai and realise that the train travel was probably the most healing, restful and adventurous part of the whole break.  And that is why Part 1 of the Adventure is dedicated to the journey!