We’re back!  As planned, we returned to Yangon on Wednesday on the lunchtime flight.  We left Bangkok in hot sunshine and had a smooth (short) cruise towards Myanmar and soon started our descent.  After 10 minutes or so into the descent, the Pilot’s voice came through on the intercom.  This always scares the whatsits out of me – I like to know what altitude we are at, the outside temperature (why, I like to know that I have no idea, but I like to know), our speed, our anticipated arrival time and the temperature at our destination.   But we had already had that announcement so when he started a new announcement, I was prepared for the worst!  I knew Tropical Storm Mindulle was crashing ashore in Vietnam and that the weather systems in the region were feeling the impact.  It is also right in the middle of rainy season and that also makes flying unpleasant, scary and on occasion dangerous.  I was also edged further towards paranoia by news of a plane crash in Nepal the previous day and in China that morning.  I was not reassured by the Captain’s message.  Apparently, despite the blue sky and pretty fluffy clouds we were flying through, the weather system in Yangon had brought heavy rain and visibility was below the minimum.  Lovely.  So we were going to hang around a while, on hold, as they nicely put it, until the weather cleared.  Now I am glad the pilot was not going to attempt any scary landing during the storm, but I was not so happy at the fact that we were in suspended animation while we waited for the weather to clear.  I know that these squalls can hang around for a while so as the hold music played, my mind readily let the worry worm in.  Suffice to say, the weather cleared pretty quickly and we were safely in Yangon only a few minutes behind schedule.  But it made me realise that my mind is terribly overactive when it comes to worry and anxiety, and it was very comforting to be back on terra firma, hopefully until after the end of rainy season. 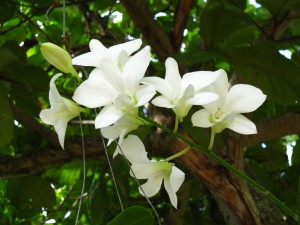 I arrived home, dumped my case, picked up my work stuff and headed back to work.  Then somehow, it was suddenly the weekend!