It’s another sunny day in Bangkok following another night of powerful storms.  A power line outside our window crashed and flashed with a surge of electricity and sudden bursts of wind accompanied pelting monsoon rain.  The innocent blue skies and sunshine made it hard to believe that the storm had been so violent, but there was evidence that it had not all been a frightening dream. 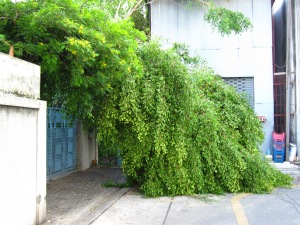 The clean up in the city continues, people are moving back into the areas affected and work is resuming.  However, Central World is still smouldering and the damage from the trouble is all around.  It feels as if it will take a long time to heal and repair.

The clean up of my post radiation skin also continues.  The radiation borders were designated by marker pen covered with transparent medical tape.  At my last session, the staff began to remove the tape, but my tender skin squealed and attempted to peel off along with the tape – OUCH!!  We all agreed that it would be best if I took the tape off myself in my own time.  Over the past two days I have slowly, delicately and somewhat painfully managed to remove all the tape.  Unfortunately I have also removed some skin, but not caused any breaks in the skin that were not already there.  I have also managed to clean up some of the markings, but have to be very careful not to immerse the skin, scrub or use any soap that might hurt the skin.  Have you ever tried cleaning with those restrictions?  It is not easy and it takes time.  My poor tender post radiation skin feels as if it is still smouldering too! The radiation continues cooking me for another couple of weeks apparently!

It also feels as if it will take a long time to heal and repair.

2 thoughts on “The clean up”